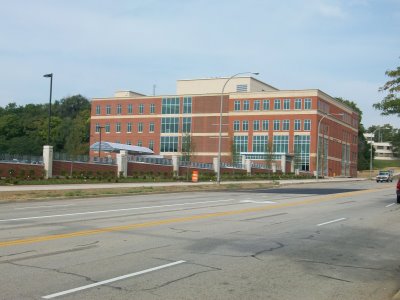 Ruyle Hullinger will be glad to discuss your communities redevelopment needs. 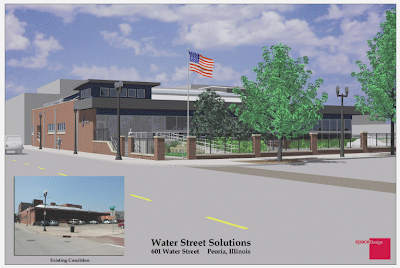 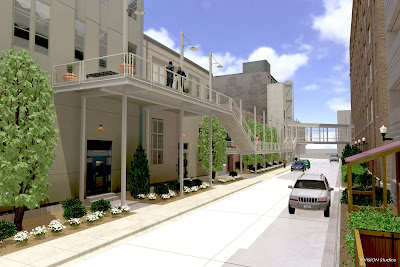 The Partners of Ruyle Hullinger have completed over 50 Redevelopment Plans with Tax Increment Finance (TIF) Districts and  District Amendments. We can assist you in planning and redevelopment of the challenged areas in your community. 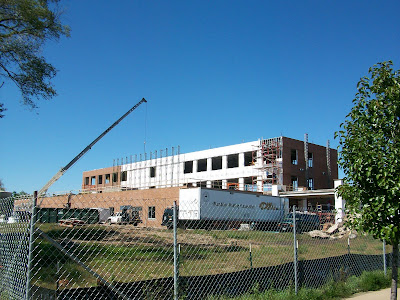 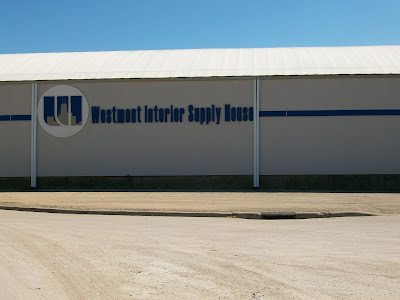 The photos show existing and proposed redevelopments in TIF's in Peoria  that took place in the past three years. The consulting team worked with City staff, Camiros, and the City Council to iniate and complete the redevelopment plans for three tax increment financing districts approved in 2007-2008. A total of eighteen (18) buildings have been approved for development or redevelopment in the three new and one existing TIF’s. 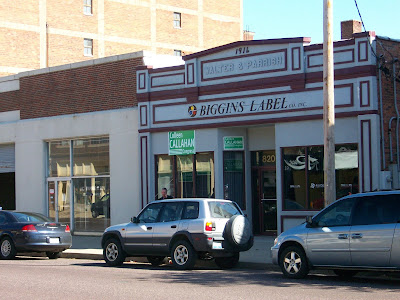 
This during the “Great Recession”.

And there are many more buildings in the works. 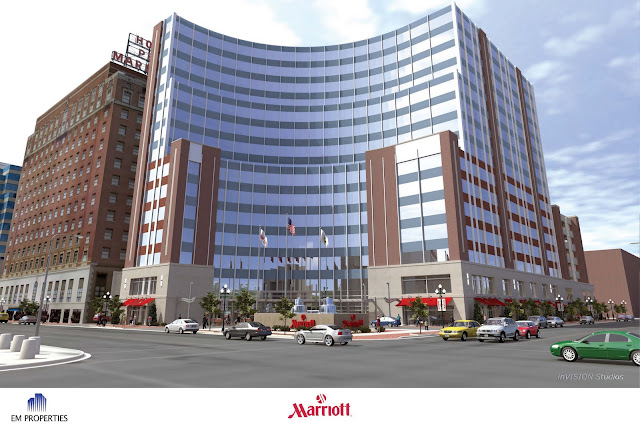 The consulting team worked with city staff and consultants to initiate and complete  redevelopment plans to bring new convention center hotels to the communities of Peoria and Tinley Park. The cities used the TIF to pay for improvements to incent the redevelopment of the hotel and convention center. The consultants also initiated successful developer recruitment efforts, and helped the city negotiate the complex agreements required to complete the hotels. 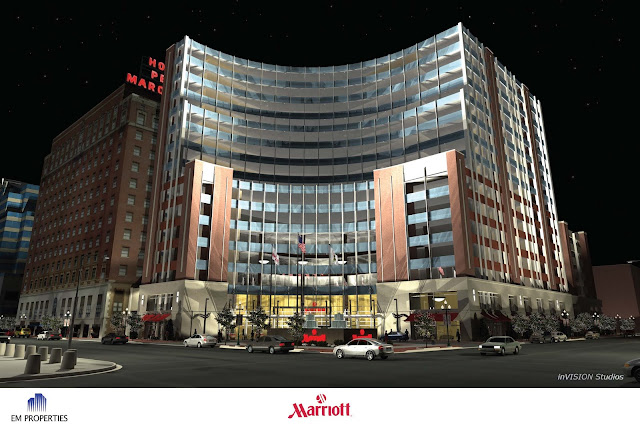 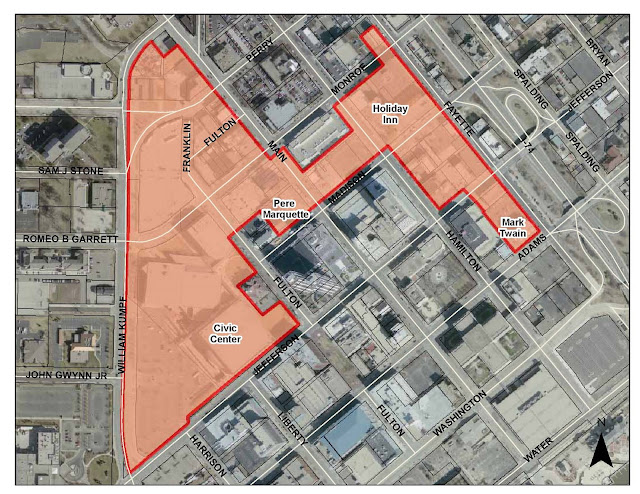 Downtown hotels and other hospitality industry business struggle to compete with quality new developments. A City can choose to compete or not to compete. A Tax Increment Financing District can assist existing and new businesses invest, improve, and expand. 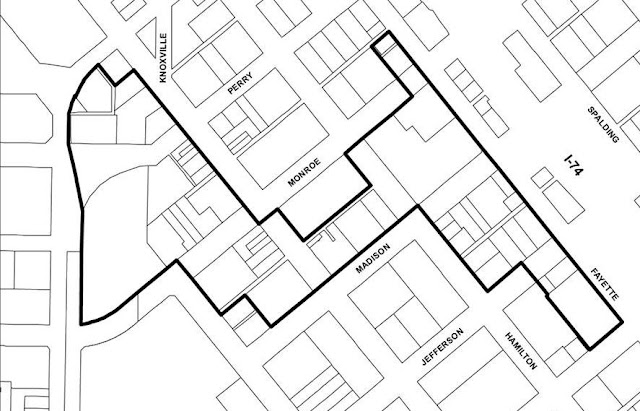 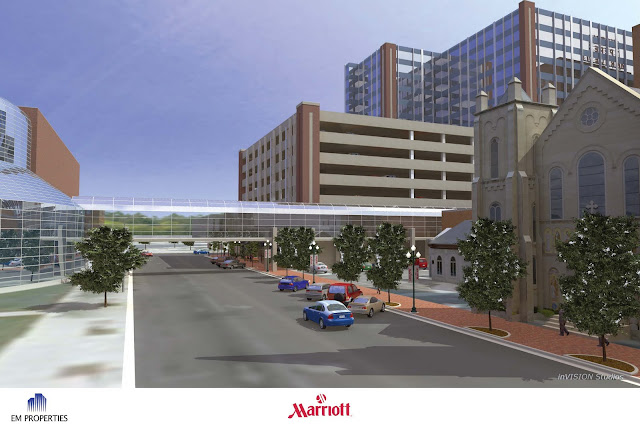 In 2008 the City created a Hospitality Improvement Zone (HIZ) Tax Increment Financing District (TIF) and a Business Development District (BDD). City staff worked with Camiros to conduct the property and building surveys that determined that the area qualified for the TIF and BDD.  The TIF captures the new property tax that will be generated by the new hotel improvements over the next 23 years, and puts part of those funds back into the development. The BDD enables the City to pass a new hotel tax and a new sales tax of up to 1% to put back into the redevelopment. The maps below show the boundaries of the TIF and BDD, and the illustrations depict the proposed hotel improvement. 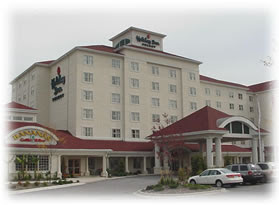 The consulting team worked with the Village of Tinley Park to create the incentive programs for the development. The consulting team recruited the successful developer and helped negotiate the complex redevelopment agreement.  The TIF paid for the land acquisition, infrastructure, and construction of the Convention Center. This incentive made it possible for the developer to construct the hotel. The development has been very successful, and is located at I-80 and Harlem (Route 43) in Tinley Park, Illinois.


The Consultants worked with City staff and Camiros to initiate the Warehouse Redevelopment Plan.  The Warehouse District was a run down area with "Great Bones", underused old 100 year old warehouses. The plan called for the redevelopment of the area into condos and apartments and commercial development. The brochure  below describes the District. More info at
http://www.warehousedistrict.blogspot.com/ 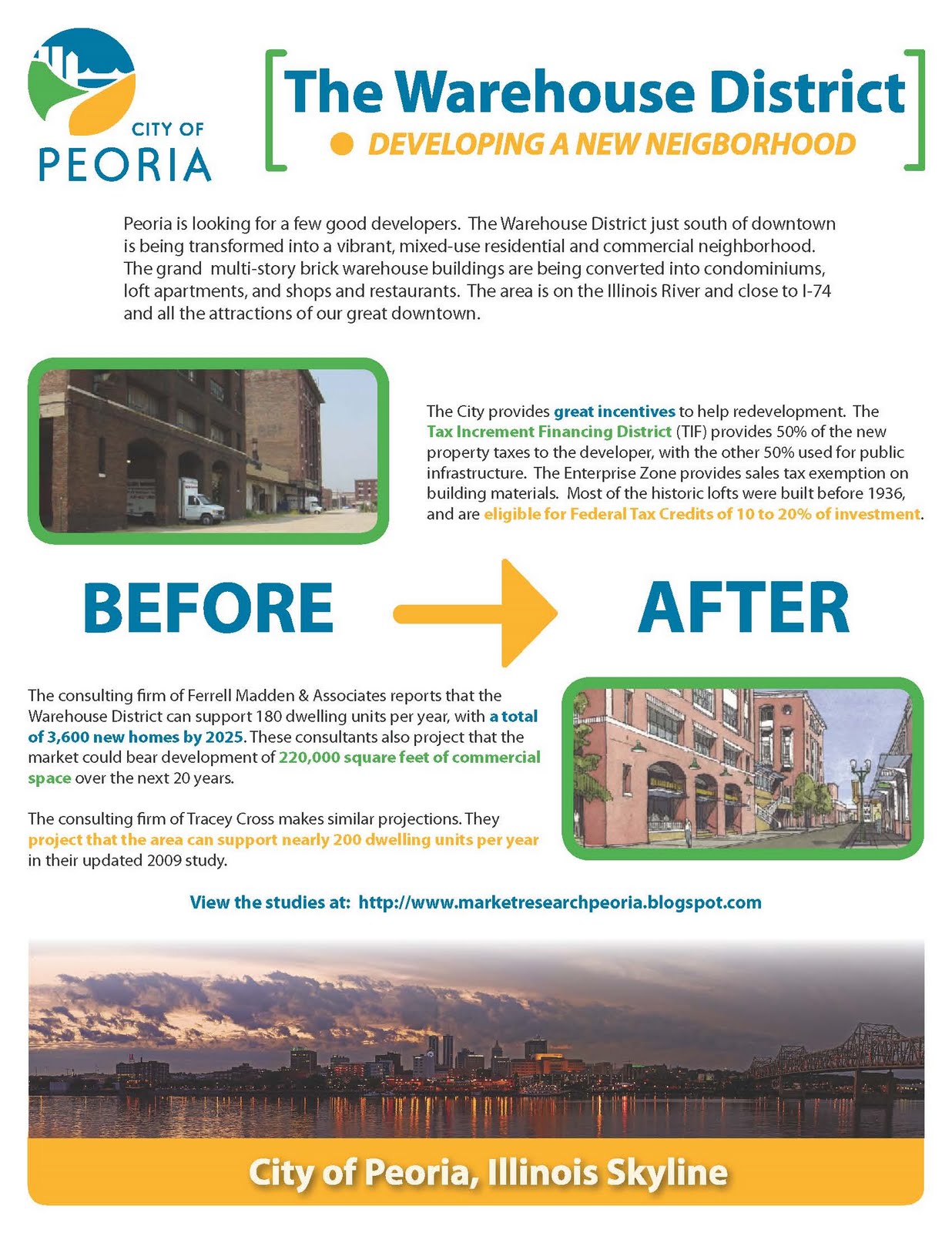 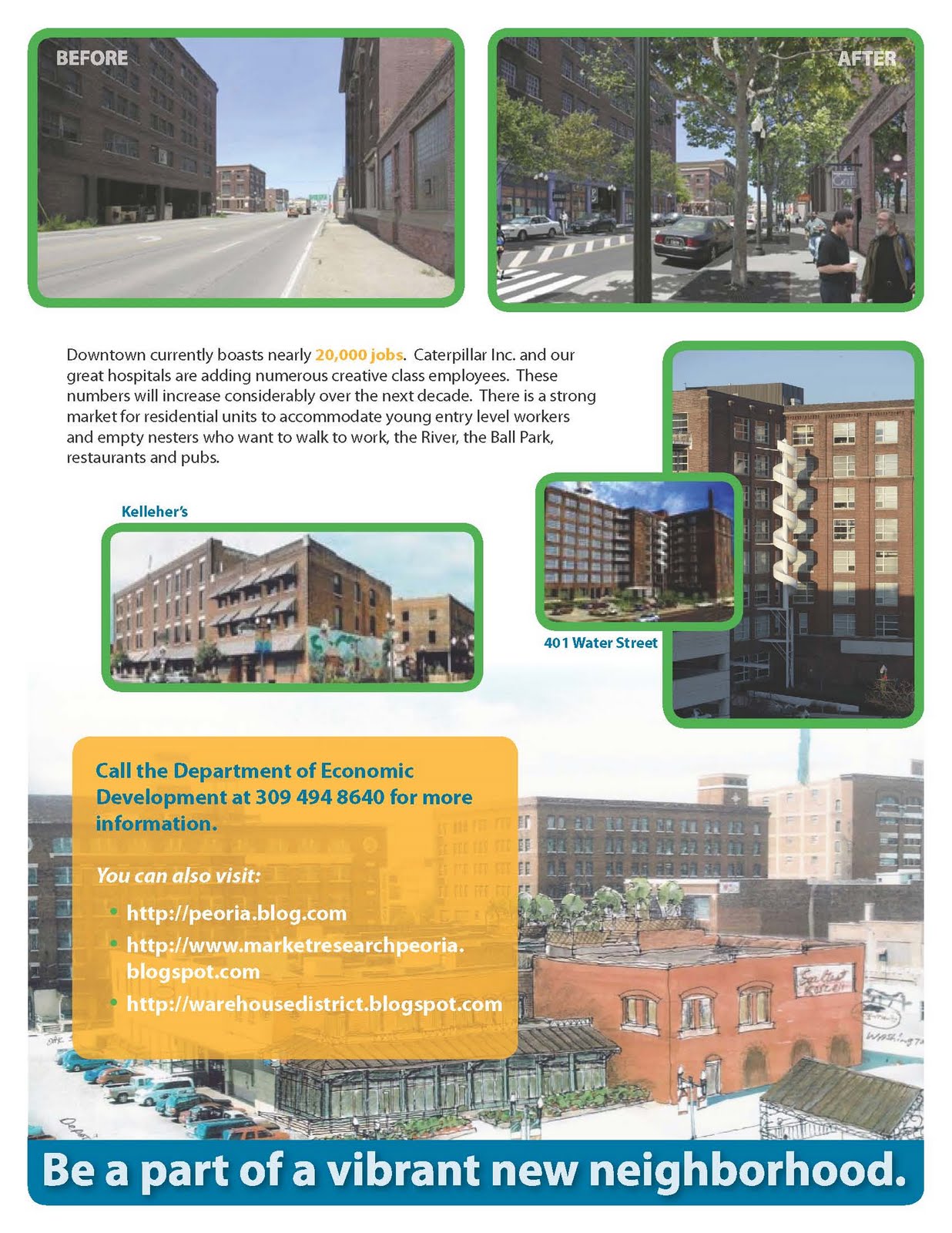 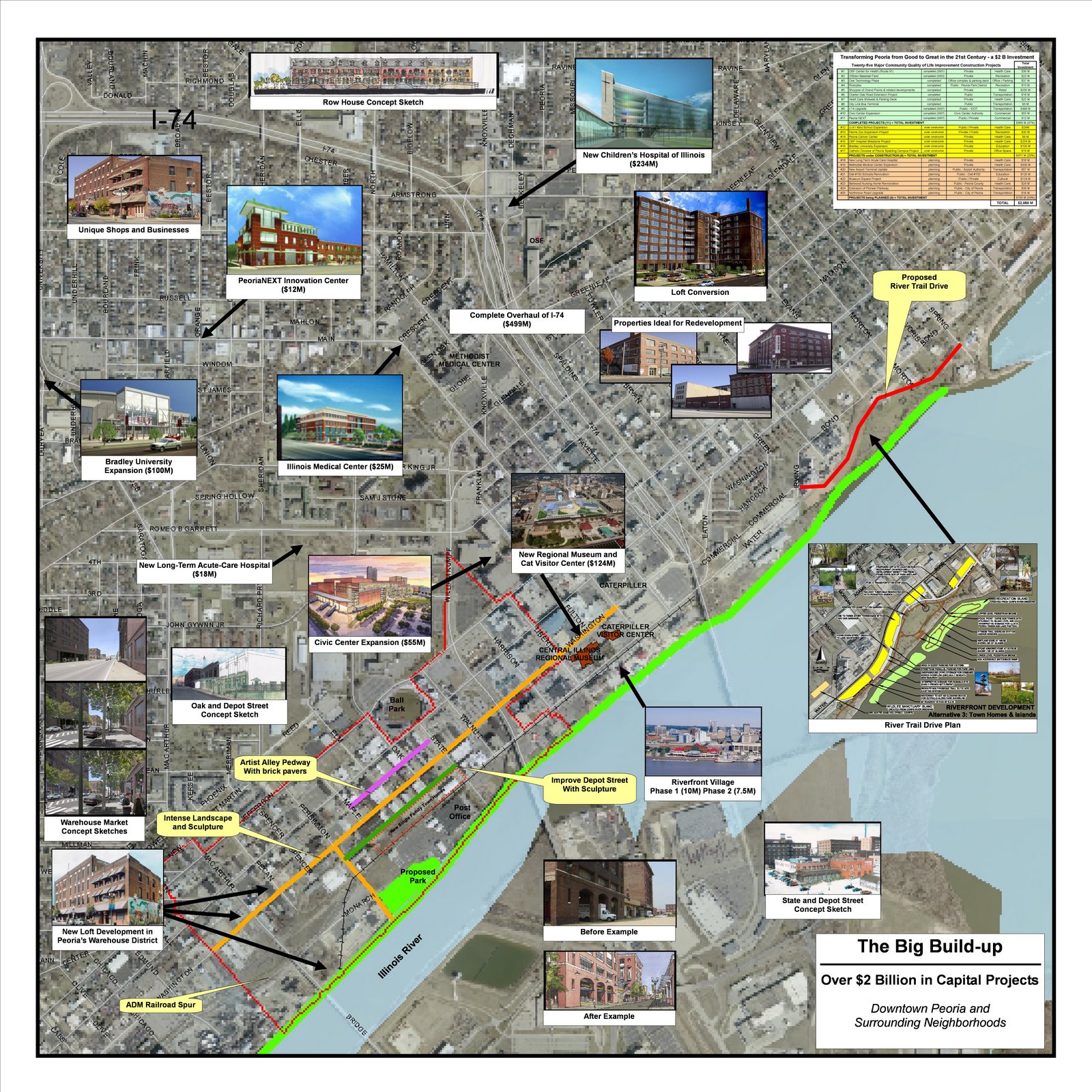 
The Southtown Tax Increment Financing District (TIF) in Peoria is one of the oldest TIF's in the State of Illinois. It was part of massive urban renewal effort the area just south of downtown. The redevelopment was controversial, and took many years, but it did result in substantial new development for Peoria, creating tax base and jobs.

The percentages below illustrate the growth in fair market value, comparing School District 150, the City of Peoria, and the Southtown TIF from 1978 when theTIF was created until 2006, the latest assessment dates.

In addition, there are two recent developments underway in Southtown - the new Long Term Acute Health Care Center, and the Main Street Medical Clinic. These two large developments will add more value and jobs to the TIF.

This TIF did create some housing with children. The City used TIF funds to help acquire land and to provide $2,500,000 for the Valeska Hinton School.

The City of  has developed nine TIF Districts. The TIFs help these areas redevelop, and the value of these areas has gone up each year since the TIFs began. The redeveloped areas create jobs and vitality in the districts.

The Southtown TIF was created in November 1978, expires in 2013 and covers 303 acres. It is bounded by, , ,  and . The main objectives are elimination of blight, total clearance and development of residential, office, industrial, institutional and public facilities.

In 2006, the City entered into a contract with Spring Grove Construction Ltd., for Phase III, the final phase, of the Spring Grove residential subdivision. This Phase will consist of construction of 8 new homes with market value of between $130,000 and $250,000. This subdivision was a part of the original plan and was started in 1995.

The UICOMP, Nursing and Public Health (Peoria Campus) is also located in the City’s Southtown TIF and enrolls approximately 50 students. In December of 2005, a group of area doctors signed a 50-year lease with the UICOMP to operate a physician's building on the medical school campus. Approximately 40 doctors will invest more than $15 million for a four- or five-story medical office on more than five acres at the UICOMP. The City assisted the development by allocating $4 million in TIF funds for construction of a parking deck. As part of the plan for continued growth, the new   Research Center will be constructed adjacent to the UICOMP main campus. The building will have two stories and provide parking for doctors and patients. The new facility will have 20,000 square feet of office and laboratory space with 10,000 square feet on each floor. There will be laboratory and office space for one professor, four associate professors and four assistant professionals as well as space for other research. The new addition to the medical campus will unite patient care, basic science and the research that bridges them. The center will encourage stronger ties among staff in different fields and disciplines by maintaining the college's traditional balance between research and clinical activities. The development of the $12 million Research  continues the City’s role as hosting one of ’ major medical complexes.

The City entered into a Purchase Option with Cullinan Medical I for their purchase of a 6 acre City-owned site in the Southtown TIF, which will be utilized for construction of a  with anticipated private investment of approximately $20 million. This project will bring 100 diverse new jobs to Southtown.

The Midtown Plaza TIF was created in March 1999, expires in 2022 and covers 9.5 acres. It is located on  between  and . The main objectives are elimination of blight and providing commercial business and service facilities.

Utilizing proceeds from tax increment financing bonds, the City and the David Joseph Companies partnered to develop . This shopping center, anchored by a 65,000 square foot Cub Food Stores, was completed in 2002. An additional 8,000 square feet of adjoining retail is also part of the MidTown development. The City coordinated the acquisition of 63 separate parcels to complete this $15 million project. It is now open and operational. A new restaurant has opened on one of MidTown’s outlots. Future developments include additional commercial development.

Demolition was completed on the former Sears building which will be home to $120 million PRM building and Caterpillar Visitor’s Center. This private investment will be assisted with $3.7 million in public dollars, which have been utilized for property acquisition and infrastructure improvements. An upscale restaurant called the Riverstation opened in the Central Business District. The total project for the River Station was $600,000, with the City providing a loan for $150,000. The City entered into a contract with Randolph and Associates for design of  and infrastructure improvements in conjunction with the Museum block.

The Stadium TIF was created in December 2000, expires in 2023 and covers 7.5 acres. It is bounded by , ,  and rear property lines of properties on the southwest side of . The main objectives are elimination of blight and development of a stadium.

In the fall of 2000, the City Council approved a development agreement for the construction of a new minor league baseball stadium, to be located in the downtown area of the City, adjacent to the Riverfront and Southtown Redevelopment areas. This private/public project resulted in the construction of a professional minor league stadium providing many of the amenities of a major league stadium. Features include approximately 6,500 permanent seats and approximately 1,000 lawn berm seats, as well as sixteen luxury suites in the upper level, covered concourse with concession stands and restrooms, video board, and a playground area in the left field area. Opening day at O’Brien Field was May 24, 2002.

The Northside Riverfront TIF was created in March 1995, expires in 2018 and covers 105 acres. It is located on I-74 to Spring Street, between Adams and the . The main objectives are improve the overall environment and rehabilitate and expand the PMP Fermentation Plant.

This TIF is anchored by PMP Fermentation. This project consists of two plant buildings. Toward the end of 2006 one of their plant buildings closed due to competition within the global market. They are currently reviewing options for use of the empty building.

The Campustown TIF was created in December 1986, expires in 2009 and covers 13 acres. It is located on 13 acres beginning at the corner of  and. The main objectives are to eliminate blight and provide commercial and support facilities in close proximity to .

The Northside Business Park TIF was created in December 2000, expires in 2023 and covers 214 acres. It is generally bounded by , Spring Street, the Illinois River and . The main objectives are elimination of blight, expansion of O’Brien Steel, installation of an S-Curve, elimination of Adams Street Row through the Project Area and establishing two-way traffic on through the Project Area plus establishment of a delineation between industrial and residential uses and provision of commercial/retail opportunities.

In 1999, the City developed the Northside Business Park TIF. O’Brien Steel purchased $1.6 million in processing equipment to expand the processing capabilities. Their shipping area was expanded to during 2006. They continue to hire employees with 175 employees reported at the end of 2007, an increase of 45 jobs over the previous year.

In June of 2007, the City looked at ways to redevelop the Central and Southern areas of the City and determined that these areas would best be served by creation of two Tax Increment Financing Districts (TIF), the Eagleview and Warehouse District TIFs. These TIFs were approved by the City Council in June of 2007 and have already resulted significant redevelopment with the signing of six new development agreements in the oldest areas of the City.

The Warehouse District south of downtown and is a mixed area of old industrial lofts, one story industrial buildings, and vacant lots. This area could become a vibrant mixed-use residential and commercial neighborhood. The old industrial lofts could become condominiums similar to the successful development of the buildings on . The street level space can become viable commercial and retail space. Artists and artisans have already located in this area.

The Eagle View TIF encompasses over 544 acres and is bound by the , I-474,  and is adjacent to a large number of residential units. The plan proposes the  creating a large high tech industrial park near Darst and Clark north of I-474. The plan also calls for a large conservation area along the , the area is known for viewing eagles as well as for fishing and hiking. 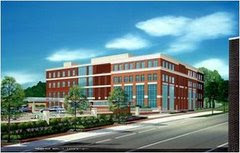 Click on the line below to see the success of TIF in Peoria.

increasing tax base and jobs. Successful projects include:

More info on TIF at


The cities of Tinley Park, East Peoria, and Normal have developed high quality conference centers and hotels which draw business from Peoria. Springfield’s attractiveness has been greatly enhanced by the Lincoln Museum. These improved competitors all received substantial assistance from government, and will draw business from downtown Peoria.


Our downtown hotels and other hospitality industry business struggle to compete with these quality new developments. The City can choose to compete or not to compete. The proposed Hospitality Improvement Zone would assist existing and new businesses invest, improve, and expand.


City Council has directed staff to present the potential HIZ TIF to our sister governments, and request their input and direction. We also ask our citizens to send us their recommendations. Thank you for your consideration. We appreciate your viewpoint.